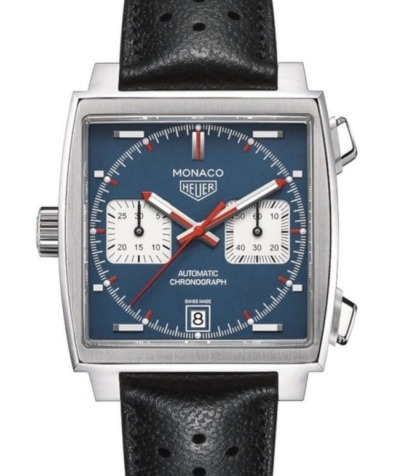 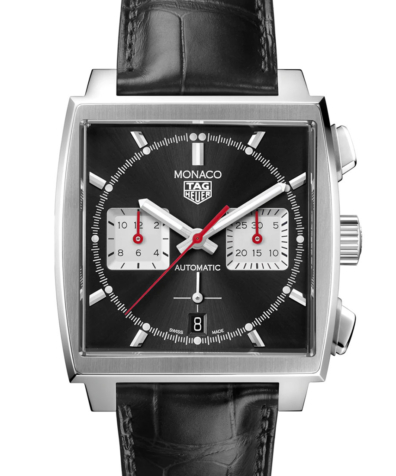 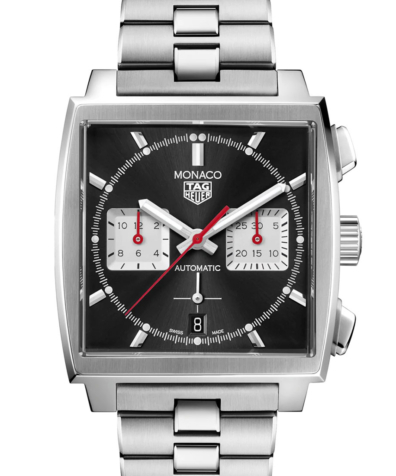 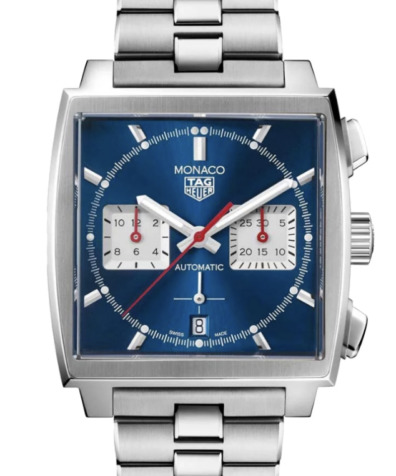 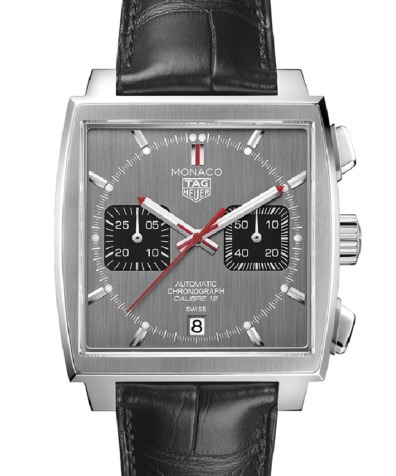 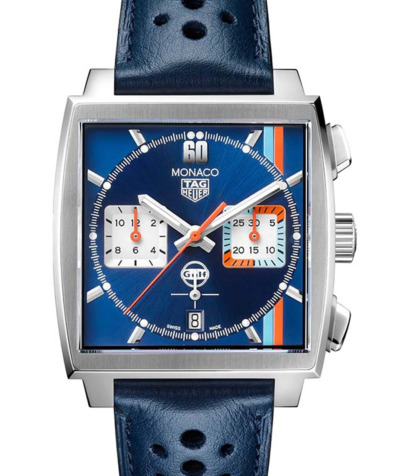 TAG Heuer Monaco – One watch, one movie, and Steve McQueen

The Monaco has a face that really stands out in a crowd. Its the best example of TAG Heuers spirit in its most creative phase and embodies the charged symbolism of the 70s and the early 80s like no other watch. Steve McQueen helped make the timepiece famous in the movie Le Mans, and isnt just the role model or an emissary for the brand, but everything that sporty chronographs represent. This is why the legendary Monaco in dark blue was so prominently named after the King of Cool. Is it ridiculous that a Monaco rakes in as much cash at an auction as a Patek-Philippe? In our view, definitely not.

Its optics and case form have always been exceptionally unique. The Monaco is a watch that packs a lot of history in its punch. It was one of the first chronographs with an automatic winding mechanism, the first chronograph with a micro-rotor, the first automatic chronograph with a module structure, and the first water resistant wristwatch with a quadratic form. Above all else, the Monaco symbolizes a lifestyle, thats been influenced by both the racetrack speed devils and the playboys of past days.

Were not exaggerating when we state that the Monaco is literally a hot commodity among collectors. Especially the Steve McQueen, in its famous dark blue version is a very sought after timepiece and in premium condition, can go for five figures on the market. In 2012, one of the three watches worn during the filming of Le Mans was auctioned off for a price of 558,950,- GBP.

Even today, the Calibre 11 is undeniably linked with the early Monacos, in which the movement with its distinctive left-sided crown was constructed. Since 2015, the most famous of all Monacos with a dark blue dial and the nickname Steve McQueen, doesnt use the Calibre 12 anymore. It instead has been equipped with the newest version of the legendary chronograph movement.

5: The five significant letters in Heuer

TAG Heuer takes care of its heritage by regularly releasing heritage models, which are reminiscent of the classics from the 60s and 70s. Even the new Monaco Steve McQueen adorns its dials with the Heuer lettering, plugging back into the companys era when it was one of the most successful family owned businesses out there.

In 1970, Steve McQueen was the main actor and co-producer in the legendary popcorn movie Le Mans. The movie didnt just elevate the status of the 24 hour race but also of the TAG Heuer Monaco as well. With the Twenty-Four, TAG Heuer paid tribute to the role that racing played in the Monaco collection and released a 950 piece limited edition series.

In comparison to the original Monaco version with a 38 mm side length, the most recent Monaco measures 1 mm longer. A case increase from roughly one millimetre guarantees that the original charm of the Monaco isnt lost for a new generation. At the same time, the watch can also be worn in a slightly larger format of 39 mm.

A Chronology of the Monaco

1882: Edouard Heuer presents the first Heuer chronograph and patents its mechanism. From this point forward, the chronograph is a pillar of all of this brands endeavors.

1970: During the filming of the cult movie Le Mans, Steve McQueen becomes aware of the Heuer Monaco and flashes it often on-screen.

2015: The classic TAG Heuer Monaco Steve McQueen isnt equipped anymore with the Calibre 12, but rather the new interpretation of the Calibre 11.

How the Monaco became a legend, thanks to Steve McQueen – Behind the scenes of Le Mans

What Paul Newman is for Daytona, Steve McQueen is for the Monaco. Just like his colleagues, he is not only the brand’s emissary, but also the namesake for multiple references that have been developed over the years. The central characteristic of the Monaco Steve McQueen is its blue dial which was often flashed in the movie. The connection between TAG Heuer and Steve McQueen was the result of a long term friendship with Jo Siffert, a racer that was well acquainted with Jack Heuer. He created innumerable connections to Formula 1 teams and as a busy Heuer sales agent, brought in a wide variety of different watches to the race pits.

During the filming of the movie Le Mans, Steve McQueen used the racing outfit from Siffert, on which the Heuer Emblem was distinctively emblazed. Both McQueen and Siffert then decided to use the watch in the movie. This is also why the role of time measurement featured more prominently in the movies plot. After Siffert had established a connection to Jack Heuer, he traveled personally to France, to present the most recent Heuer models. Steve McQueen decided for the flamboyant, square shaped chronograph, of which three served as movie props. The rest is, as they say, history.

By clicking “Accept All Cookies”, you agree to the storing of Strictly Necessary cookies on your device. To enhance site navigation, analyze site usage, and assist in our marketing efforts you can edit the preferences on this menu and accept the Analytics cookies.

Strictly Necessary. These cookies are necessary for the website to function and cannot be switched off in our systems. They are usually only set in response to actions made by you which amount to a request for services, such as setting your privacy preferences, logging in or filling in forms.
Analytics Cookies. These cookies allow us to count visits and traffic sources, so we can measure and improve the performance of our site. All information these cookies collect is aggregated and therefore anonymous. If you do not allow these cookies, we will not know when you have visited our site.